Auto-antibodies have been recognized to cause heart failure in many patients. The antibodies are directed against the beta-adrenergic receptor and mimic the effect of natural ligands, such as epinephrine (adrenaline). This mechanism leads to a chronic over-stimulation of the receptor and consequently, to heart failure – reduced function of the heart.

Cyclic peptides for the treatment of chronic congestive heart failure have already been tested in humans in a placebo-controlled trial, and were shown to be well tolerated. They showed good efficacy to neutralize anti-ß1 receptor autoantibodies.

In June 2012, this development project was sold to Janssen-CILAG GmbH, a subsidiary of Johnson + Johnson, New Brunswick, NJ, USA. A price of 100 million USD for the respective company Corimmun GmbH was paid subsequently, and further milestone-dependent payments and royalties were agreed. This payment therefore allowed for a substantial return on the prior investments by (semi-)public institutions using taxpayer money  (e. g. grants by the German Research Ministry (BMBF) or investments by Kreditanstalt für Wiederaufbau (KfW) or HighTechFonds): In addition to relevant investments by private fonds, these (semi-)public institutions had contributed 10.4 million EUR from 2008 to 2012. From 2012 to 2014, an overall sum of 52.6 million EUR was paid back to these institutions or as taxes.

A Phase II study was carried out in patients with chronic heart failure (NCT01391507). This study was terminated early and converted to a pilot study by the sponsor Janssen (J+J) for strategic, but not for medical reasons.

The further clinical development of COR-1 is currently being organized by the University of Würzburg, Germany, which still holds the proprietary rights on the patents. An additional phase IIb study is currently being prepared at the German Comprehensive Heart Failure Centre (EudraCT 2015-002010-68) 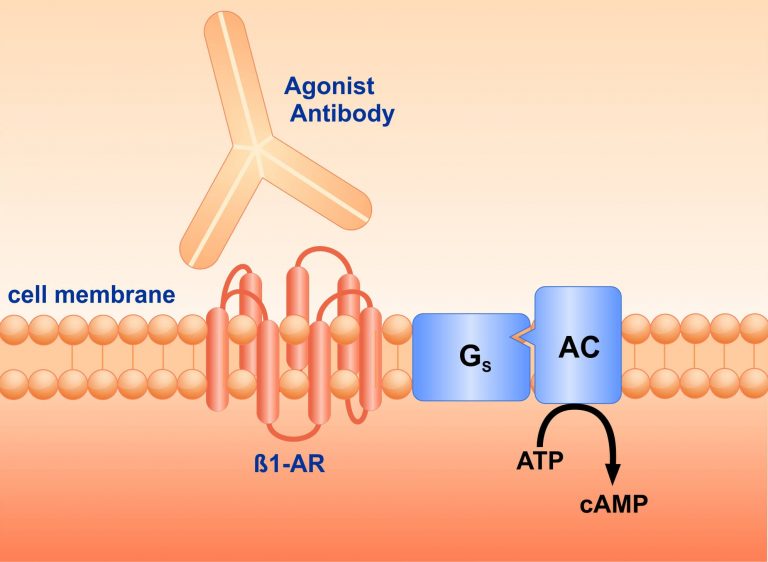 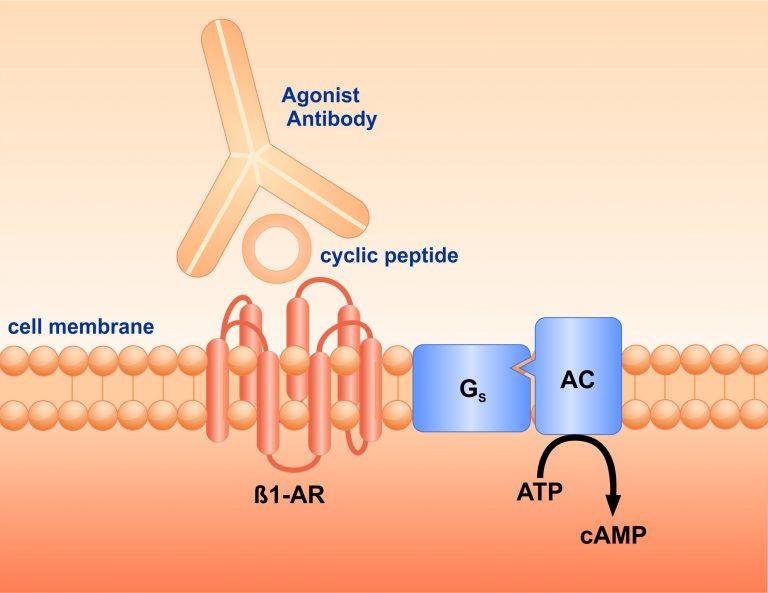 These auto-antibodies are directed against native thyroid stimulating hormone (TSH) receptors in the thyroid gland, which they activate like the naturally occurring hormone TSH. This mechanism leads to a chronic excess stimulation of these important regulatory receptors and consecutive hyperthyroidism.

Novel cyclic peptides effectively treat the auto-antibody-mediated propagation of hyperthyroidism. They reduce stimulatory antibodies by immune interference. In disease models, the cyclic peptides successfully improved goiters (thyroid enlargements) and hyperthyroidism and also cured eye symptoms (“auto-immune orbitopathy”) which frequently occur in this condition and are especially hard to treat. Moreover, significantly decreased anti-TSHR antibody titers were detected after peptide therapy in additional investigations at the group of George Kahaly, University of Mainz. Further preclinical investigations including a battery of high-dose safety tests have not revealed any safety issues, lack of immunogenicity, and favourable pharmacokinetic parameters. Submission of all documents (including investigator´s brochure and IMPD) to the European Medicine Agency´s (EMA) portal and BfArM has resulted in the confirmation that a first in man clinical trial is principally deemed possible by regulatory authorities, once final fill and finish of the existing GMP batch of TSHR peptide has been completed. This milestone corresponds to the US Food and Drug Administration´s investigational new drug (IND) status.

Rheumatoid arthritis (RA) is a widespread autoimmune disease characterized by citrullination of various proteins that induce autoantibodies and lead to inflammation of the inner lining of joints (synovium). In the worst case, this can cause destruction of these joints. These antibodies to citrullinated proteins can be found in patients´ blood/serum (detected with cyclic citrullinated peptides (CCPs)), and are one of the most specific biomarkers for RA. Targeted “biologic” drugs partially inhibit autoantibody production through immunosuppression, but can cause serious adverse effects such as increased risk of infection. Examples include antibodies directed against tumor necrosis factor (TNF-alpha), and rituximab, a CD20-specific antibody, all of which are therapeutically effective in RA. However, autoantibody-secreting CD20-negative plasmablasts and long-lived plasma cells are not reduced by these or other existing therapies. Therefore, a great medical need for even more specific therapeutic options prevails.

Our group investigates novel antigen-specific therapies such as epitope-derived peptides, RNA or cell therapies against RA.